SAVE Action PAC endorses Carlos Gimenez for re-election as Mayor of Miami-Dade County!

SAVE Action PAC is proud to endorse Carlos Gimenez for re-election as Mayor of Miami-Dade County in the August 30 election! 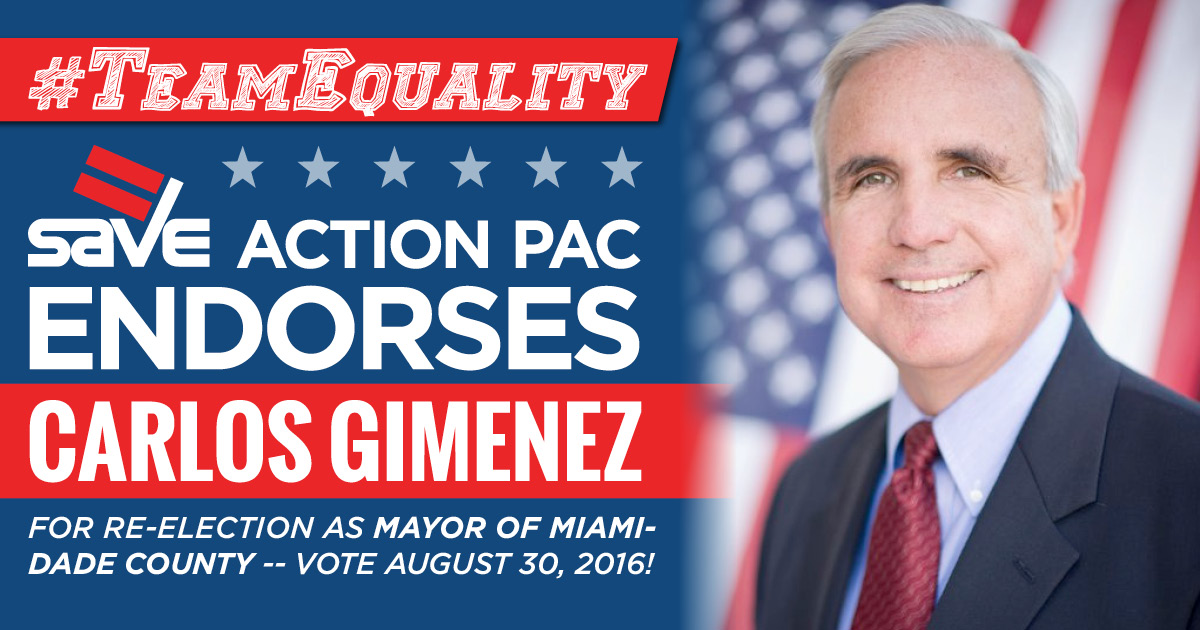 Mayor Gimenez’s support for nondiscrimination protections was crucial in 2014 when we won those protections for transgender folks at the Miami-Dade County Commission after a hard-fought campaign.

That key support makes us proud to have endorsed Carlos Gimenez as the pro-equality candidate in 2012 -- and he has continued to make us proud in his service to all Miamians as Mayor these past four years. SAVE Action PAC is pleased to again endorse Mayor Gimenez for re-election in August 2016.

“It’s been an honor to stand with Miami-Dade’s LGBT community as Mayor of this great county,” said Gimenez in a nod to the endorsement by SAVE Action PAC in his first campaign in 2012, which was widely cited as key to his victory that year.

“I've made a commitment to serve ALL Miamians, and one of my proudest legacies as Mayor will be the historic strides toward equality that we made together during my first term on issues like nondiscrimination protections for transgender folks," he recounted, "and I hope to cement that pro-equality legacy by continuing to defend LGBTQ rights during my second term as Mayor."

Since his election, the LGBTQ movement both nationwide and locally has achieved some of its greatest victories, such as the passage of comprehensive nondiscrimination protections in Miami-Dade County, as well as court victories in SAVE's 2014 marriage equality case in Florida and for nationwide marriage advocates at the Supreme Court in 2015.

However, in response to these victories, the movement for LGBTQ equality has come under some of the fiercest backlash in its history. Amid widely publicized resistance to marriage equality such as that of Kim Davis in Ketucky, SAVE fought back repeated attempts by Florida lawmakers to pass anti-LGBTQ bills during the 2015-2016 legislative session, including a proposal which would criminalize the use of restrooms by transgender Floridians as well as one which would legally sanction discrimination against LGBTQ Floridians.

In contrast, Mayor Gimenez has repeatedly gone on record during his first term in enthusiastic support of proposals that would ensure that all residents of Miami-Dade County are treated equally and respectfully -- and he has not shied away from defending those proposals from hateful attacks by extremist opponents of equality.

"When we added nondiscrimination protections for transgender folks, the argument was that, oh, now we are going to have a public safety issue in our bathrooms," he told a gathering of SAVE supporters in March, referring to the red herring posed by opponents of inclusive nondiscrimination laws that such proposals create a so-called "loophole" for male predators to enter public facilities designated for women with the intent of committing a sex crime.

The reality is that this behavior is already illegal, and furthermore has never been recorded in the hundreds of American state and local jurisdictions which have passed nondiscrimination protections -- including Miami-Dade County, Broward County, Palm Beach County, and various other local jurisdictions in Florida.

"You know how many public safety incidents we have recorded in restrooms related to passing these protections?" he asked, as he gestured the 'zero' symbol. "None," he answered emphatically, "and I know that Miami-Dade County has been made stronger by protecting all of its residents from discrimination."

In his State of the County speech at FIU in February 2015, Gimenez also cited his record in support of LGBTQ equality. “I was proud to stand with commissioners who voted to protect our transgender residents in December of last year,” he said, “and welcomed the court rulings that finally gave adults the right to marry whomever they choose.”

For more information about where to vote, when to vote, and how to register to vote, please visit: save.lgbt/vote.