With the long Presidential primary season having drawn to a close, I'm so excited to announce SAVE Action PAC's biggest 2016 endorsement yet:

SAVE Action PAC is proud to endorse Hillary Clinton for President on November 8th!

Secretary Clinton has secured our endorsement after defeating another fantastic pro-equality candidate, Senator Bernie Sanders, in a vigorous and productive debate over a positive vision for the future of America. We welcome Senator Sanders' voice in favor of equality on the campaign trail this fall and commend him for his service to his country and LGBTQ Americans. 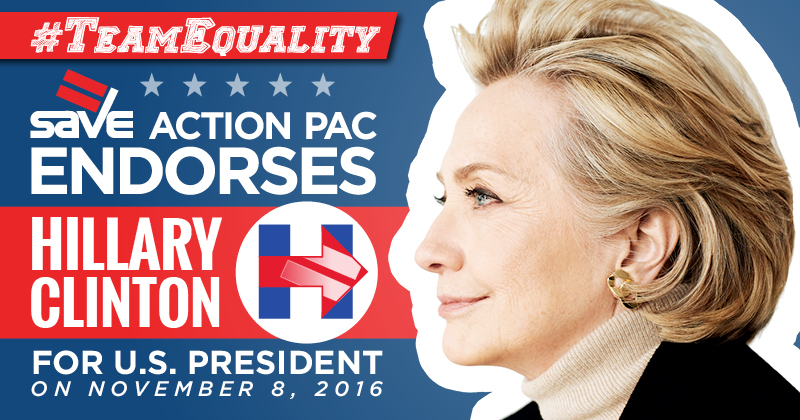 Secretary Clinton has a lifetime of achievements and experience backing her run for the presidency. Some of her achievements on behalf of LGBTQ Americans include:

During her campaign for President, Secretary Clinton has laid out a strongly pro-equality agenda which includes:

We are so proud to support Secretary Clinton in her historic bid to become the 45th President and first woman to lead the United States of America, and we are pleased with her choice of Tim Kaine as her running mate, who has a decades long pro-equality record as Virginia's former Governor and current Senator.

President Obama said last night that America is ready to pass the baton to Hillary Clinton, and we couldn't agree more.

Unfortunately, as we saw last week at Donald Trump's convention, the opposition is well-funded, and it's just getting started sliming pro-equality candidates.

What kind of America would threaten to lock someone up simply for expressing their political views? And yet, amid chants of "lock her up," cartoonishly anti-gay politicians like Pam Bondi, Mike Pence, and Donald Trump spent an entire week in Cleveland trashing pro-equality leaders and policies -- instead of presenting their own vision for the future.

Will you give $50, $100, or even $250 to #TeamEquality's 2016 Victory Fund so we have the resources to support pro-equality candidates who will fight for a positive future? Click here. >>

By standing together as a community, we can make sure equality prevails this election season. Thank you for your support.