SAVE Action PAC is proud to endorse Ileana Ros-Lehtinen for re-election as the U.S. Representative for Florida's 27th Congressional district! 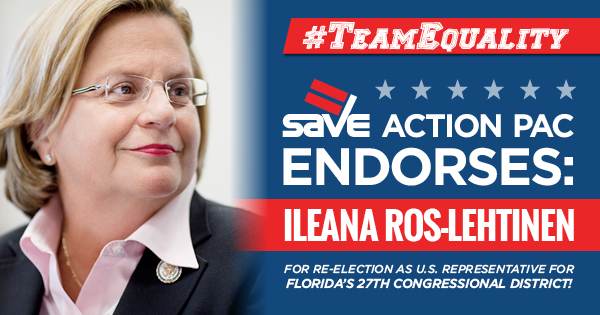 Earlier this month, SAVE enjoyed the privilege of hosting the Congresswoman, her son, Rodrigo Heng-Lehtinen, and her husband, Dexter Lehtinen at Miami-Dade College for the debut of our groundbreaking nondiscrimination PSA, "Family is Everything."

The Congresswoman and her family did a beautiful job articulating our message of inclusion and respect for transgender Americans -- and it was covered by the New York Times and even made it onto The View!

Additionally, over the years, Congresswoman Ros-Lehtinen has made herself known as a champion for LGBTQ rights. For many years, she was the sole Republican in the House LGBT Equality caucus, and in addition to being a founding member, she was the first House Republican to come out in favor of marriage equality in 2012. She was also the first Republican to co-sponsor a repeal of both the Don’t Ask Don’t Tell policy and the Defense of Marriage Act.

Simply put, without the steadfast support of allies like Congresswoman Ileana Ros-Lehtinen, our movement -- locally AND nationwide -- would not be where it is today. SAVE Action PAC is proud to support Congresswoman Ros-Lehtinen for re-election as the Representative from Florida's 27th Congressional district this November.