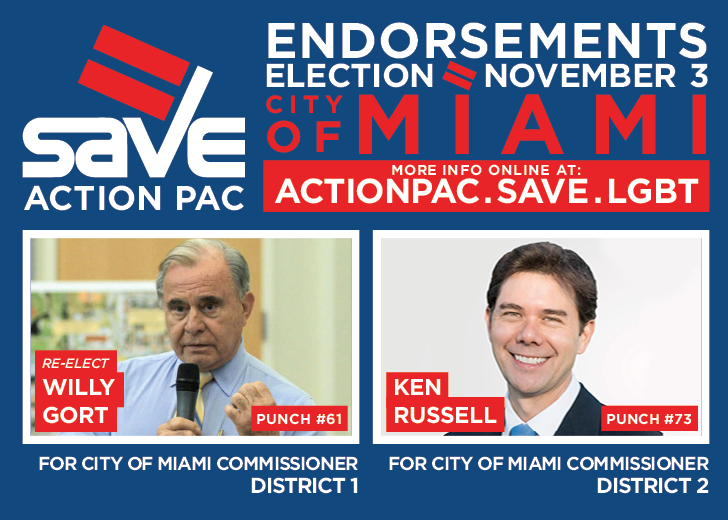 SAVE Action PAC endorsements in the November 3 elections for City of Miami Commission:

Commissioner Gort is a longtime public servant of the City of Miami. He served on the City Commission from 1993-2001, and then again since 2010. In his questionnaire answers, Commissioner Gort emphasized his support for comprehensive nondiscrimination policies as well as an inclusive atmosphere in the City Government.

To our panelists, the highlight of Commissioner Gort's interview was his promise to publicly support a variety of pro-equality policies, such as visitation rights, immigration rights, survivor benefits, and tax equity. For all of the above reasons SAVE Acion PAC endorses Willy Gort for re-election as the City of Miami-s Commissioner from District 1.

Ken is a newcomer to the local political scene with a background in international sales and marketing, currently working in watersports gear sales and distribution. He resides in Coconut Grove with his wife, Julianna, and his three children. Ken was born and raised in Miami, and after leaving South Florida to live all over the world -- learning Spanish, Portuguese, Japanese and French in the process -- he returned to his hometown.

While our panelists had the privilege of interviewing five amazing candidates for the District 2 race, Ken stood out as the one to endorse. Ken's knowledge of LGBTQ issues is extensive: he cited unchallenged stereotypes contributing to discrimination; highlighted the overlapping priorities between the LGBTQ community and other important local constituencies; and emphasized tackling homelessness -- a problem disproportionately affecting LGBTQ youth -- as a key plank of his platform.

Our panelists saw in Ken the potential to lead on LGBTQ equality as a champion of our community for many years to come. SAVE Action PAC is proud to endorse Ken for the open seat for the City of Miami Commission's District 2.