This week, the Republican Party gathers in Cleveland to nominate Donald Trump for President. Last night, Melania Trump kicked things off with a speech plagiarized from Michelle Obama, that she claimed to have written herself with "little help."

This comes days after Trump announced his running mate, Indiana Governor Mike Pence, beloved by the anti-gay fringe for his legalization of discrimination against LGBTQ Hoosiers last year.

Will you give $50, $100, or even $250 to #TeamEquality's 2016 Victory Fund so we have the resources to fight tooth and nail against hateful politicians like Donald Trump? Click here to give now. >> 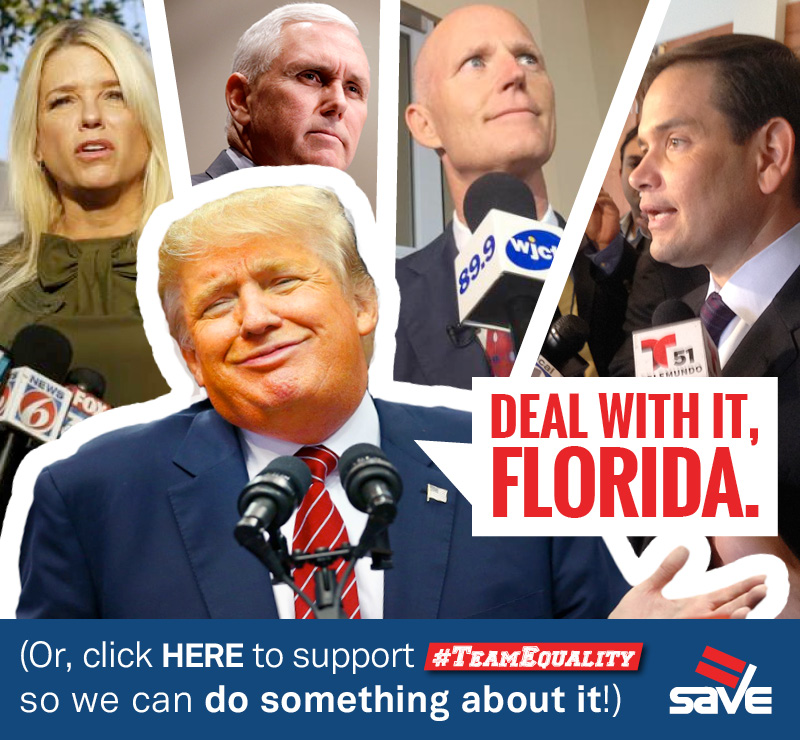 Is it a surprise that any of these career politicians would cozy up to an angry homophobe, woman-hater, and racist like Donald Trump?

After all, Marco Rubio already broke one promise to Floridians in reversing course on re-election after the tragedy in Orlando, and again when he chose not to show up for the most votes of any Senator. Why should Marco Rubio care to break yet another of his promises not to support Trump and his bigotry?

Rick Scott has been Trump's homophobic henchman-in-chief in Florida since day one. That's to be expected given his support for his friend Pam Bondi's crusade against marriage equality in 2014.

Don't get us started on Bondi, who outright lied to Anderson Cooper on live TV days after Orlando about her refusal to support for LGBTQ Floridians, and who Trump is accused of paying off $25,000 to drop an investigation -- avoiding punishment because her friends control Tallahassee from top to bottom.

Pam Bondi, Marco Rubio and Rick Scott might have friends like Donald Trump writing $25,000 checks to their anti-LGBTQ campaign, but unfortunately for them, the people united can accomplish much more.

This election season, more than any before, calls on our community, and all freedom-loving Americans, to join in a united front against an existential threat to our way of life. I hope you will heed that call.