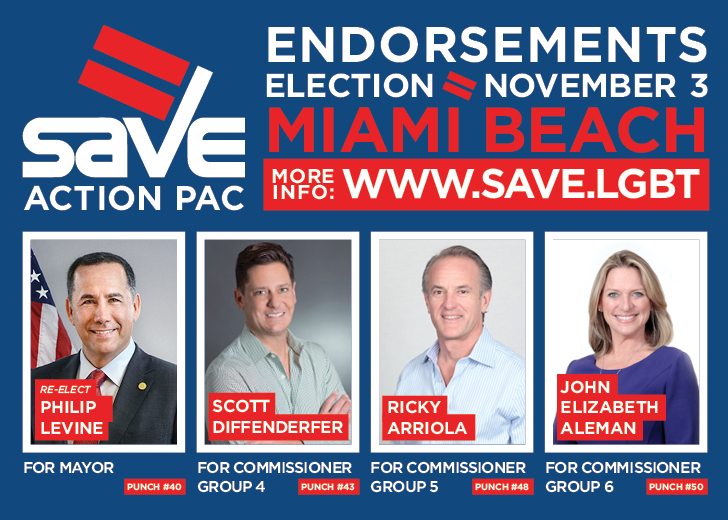 SAVE Action PAC endorsements in the November 3 elections for Miami Beach Mayor and Commission:

- Philip Levine for re-election as Mayor of Miami Beach

Among Mayor Levine's accomplishments for the LGBTQ community include working closely with SAVE in 2014 to pass an ordinance ensuring provision of insurance benefits for transgender employees of the City. He also worked during the summer of 2015 to pass a City of Miami Beach resolution urging the Florida legislature to pass the Competitive Workforce Act introduced in the State House.

The City’s has enjoyed a record-breaking performance on HRC’s municipal equality index under his watch, which has generated national headlines. For all of these reasons, SAVE Action PAC is proud to endorse his re-election bid.

Scott is a longtime resident of Miami Beach, and currently serves as the president of the Belle Isle Residents Association, where he works directly with city and county officials to solve real problems. He is openly gay and an active member of South Florida's LGBTQ community, with an extensive history of volunteerism on behalf of this and other causes.

Ricky Arriola is the Founder and CEO of Inktel Holdings Corp, a company headquartered in Miami and with offices throughout the United States. Ricky has taken an active role both locally and nationally in the areas of arts and culture; education and youth empowerment; business mentorship; and entrepreneurship.

Ricky was the Chairman of the Board of the Adrienne Arsht Center for the Performing Arts of Miami-Dade County. He was appointed by President Barack Obama to serve on the President’s Committee on the Arts and the Humanities (PCAH). On issues of LGBTQ equality, he has promised to engage SAVE's new Hispanic Business Coalition initiative to promote equality as a business value in South Florida. He has also pledge to encourage other municipalities to support nondiscrimination and tax equity reimbursement resolutions. We are proud to endorse him for the Miami Beach Commission.

John is a business professional and an active member of our community. Her corporate career was in information technology and she currently provides strategic technology consulting to her former employer, Ryder System, Inc., a Miami-based Fortune 500 company. John has been active in her children’s schools, including serving as President of the North Beach Elementary PTA, and is a strong supporter of public education. Her vision includes connecting to local PTA's to initiate parent-community dialogue surrounding issues for LGBT families. She has also pledged to donate her leftover campaign funds to LGBT youth homelessness initiatives.

John emphasized in her interview with our panelists that she envisions leveraging her experience in business, education and parenting on issues of harrassment and bullying of LGBTQ youth and adults. She mentioned strengthening access to healthcare for transgender city employees. Her nuanced and knowledgeable answers to questions on LGBTQ issues both on paper and in-person duly impressed our panelists. We are proud to endorse John for the Miami Beach Commission.

Please join SAVE Action PAC and #TeamEquality in supporting Mayor Levine in his re-election bid, as well as Scott, Ricky, and John Elizabeth in their bids for the City Commission! Your contribution of $50, $100, or $250 will go straight towards our grassroots effort to help elect these candidates. Click here to donate on behalf of SAVE Action PAC's #TeamEquality now. >>

"Each of these candidates was hand-picked by a panel of community members and allies and has a proven record in support of equality for all," said SAVE Executive Director Tony Lima. "Support for LGBTQ equality is a winning position, and I'm confident that by standing together with these great leaders we can score another victory for Miami Beach on November 3rd."

SAVE Action PAC is so proud to throw the LGBTQ community's support behind these great pro-equality candidates, but we'll need your help to make their pro-equality case to the voters of Miami Beach.